FREE SHIPPING on most orders over $95. See details and exclusions.

The love of waterfowl hunting is what drives the team of Heartland Waterfowl (HW). Led by Ronnie Philips and Logan Burditt, this group of hunters follows the migration of geese and ducks through the Central and Mississippi Flyways. Along the way, they document their passion for scouting and hunting waterfowl, and promote the true ethics of waterfowl hunting in their award-winning television show.

Originally just a group of passionate hunters, the Heartland Waterfowl television show was created in collaboration with Mike Hunsucker and Shawn Luchtel (Executive Producers of Heartland Bowhunter) as an extension of the successful HB brand. Logan grew up going to school with Mike and Shawn and occasionally filmed them on deer hunts, but Logan’s true passion was waterfowl. Ronnie’s 22 years in radio broadcasting and marketing established a foundation for his ability to parlay that experience into the outdoor industry, helping HB and later launching HW. Ronnie and Logan then assembled a team of like-minded waterfowl hunters, also passionate about capturing an authentic story creatively through the lens of a camera with the intent to produce the very best cinematic content in the waterfowl hunting space of outdoor television. Since then, Heartland Waterfowl has been recognized with multiple award nominations and won the Golden Moose Award in 2016 for “Best Wingshooting” and 2017 for "Best Show Intro & Graphics”. Season 9 will premiere this July on Sportsman Channel. 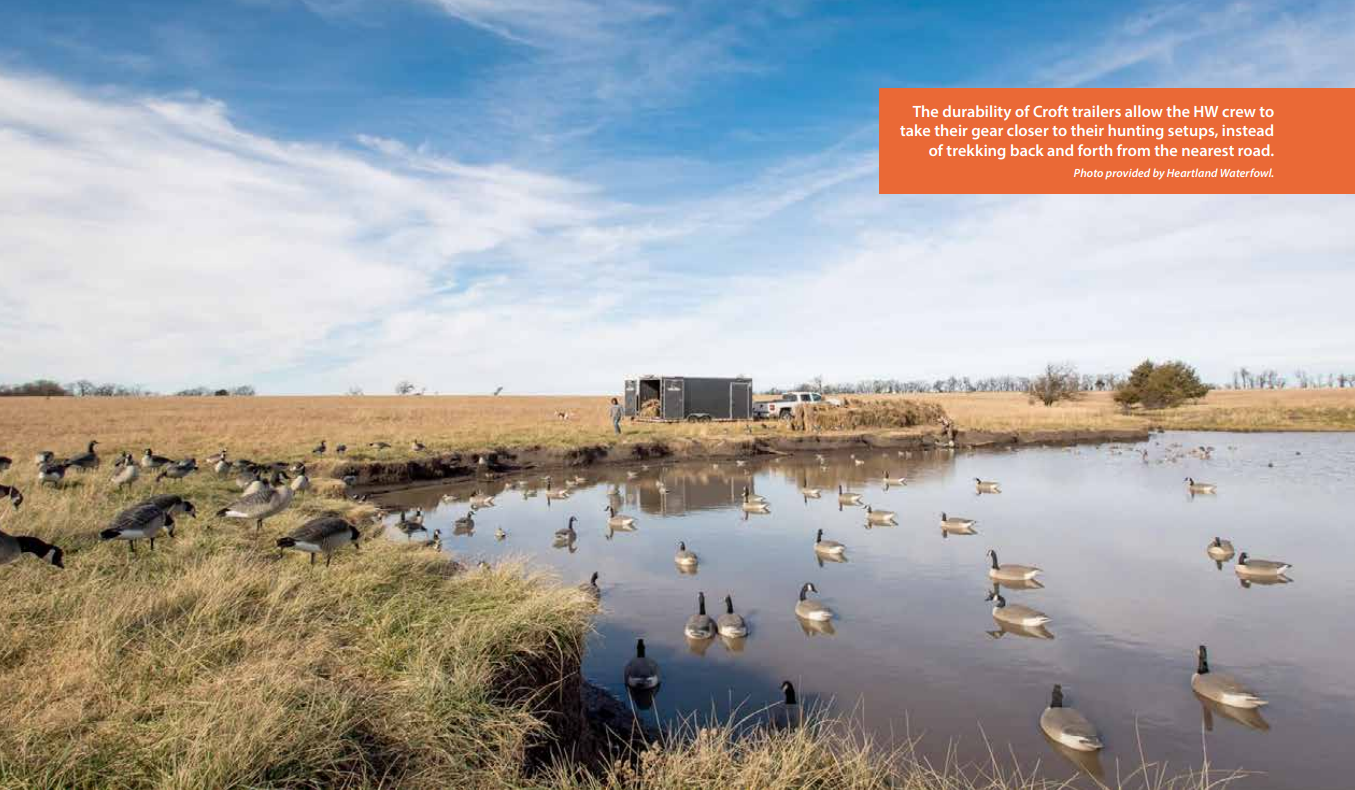 Over the years of filming for the show, the crew realized they kept having issues with their original enclosed trailer. It wasn’t built to handle the wear and tear of driving through rough farmland and marshes consistently, and often prevented them from going on hunting trips when it had to be repaired. Eventually they began searching for a new trailer that would better handle all the tough demands they had, and found Croft Trailer Supply. A brand new, custom built enclosed trailer was made to fit all their needs, including a reinforced undercarriage, built-in gun safe, plenty of exterior lighting for nighttime set-ups, recessed E-track and D-rings, locking cabinets and a protective floor liner to make cleaning fast and easy.

For any waterfowl hunter to be successful, they need travel with the gear that allows them to ’set the trap’. This requires several dozen decoys of many different varieties, making it essential to have a quality enclosed trailer. The original storage system they were using also wasn’t particularly helpful for all the decoys they needed, so Logan and Ronnie began prototyping a lock and rod system for storing decoys that would also make their decoy set up faster. When they reached out to Croft Trailer Supply for their new trailer, they also brought their new decoy storage system, which Croft helped develop into the Rapid Decoy Deployment system (RDD3). This new system allows the guys to quickly access their decoys, making set-up and pick-up much faster. Made of powder coated steel tubing, the RDD3 is tough enough for even the roughest hunting trips. The RDD3 is even modular, it can fit into any size enclosed trailer.

Along with their custom enclosed trailer, the HW guys use another Croft trailer while on their hunting trips. A sturdy, steel utility trailer allows them to haul a UTV with them, which then turns around and tows that same trailer through the cornfields while carrying other gear they need. These Croft trailers allow the HW team to spend more time savoring the joy of the hunt, as well as giving them more time to dedicate to the filming of their television show.

To follow the story of the Heartland Waterfowl guys as they follow the migration, find their show on the Sportsman Channel, or check out their YouTube channel. Find more info about the team at www.heartlandwaterfowl.com. Want a trailer for your own waterfowl hunting adventures? Call Croft at (800) 426-8159 to start customizing your own.

IN THE NEW CAMPINAWE SPORTS TRAILER Off-roading and camping tend to go hand in hand, as some of the best camping spots are off the beaten path. Unf … Read Article
The love of waterfowl hunting is what drives the team of Heartland Waterfowl (HW). Led by Ronnie Philips and Logan Burditt, this group of hunters … Read Article
Nestled in Mapleton, Kansas is Kansas Rocks Recreational Park or KROCK. Home to 380 acres of glorious rock crawling terrain, this park is known f … Read Article
×